To celebrate the release of #Horror, the directorial debut from actress and designer Tara Subkoff, PAPER had the film’s stars — Chloë Sevigny (who also graces the cover of our #Fandemonium issue), Natasha Lyonne, Taryn Manning, Lydia Hearst, Annabelle Dexter-Jones and Stella Schnabel — pay tribute to Carrie, Psycho and other classic scary movies.

Halloween seems like as good a day as any to dress up as the star of an iconic horror movie. However, when Lydia Hearst donned a Mia Farrow-style pixie wig and prosthetic pregnancy belly, and Chloë Sevigny allowed herself to be doused in fake blood, it wasn’t purely for the love of the holiday. In this case, the two actresses were at a New York photo studio on October 31st for a shoot inspired by#Horror, the directorial debut of actress and fashion designer Tara Subkoff.

In the film, Subkoff marries the aesthetic of horror classics like The Shining and The Exorcist with the very contemporary terror of cyberbullying. #Horror, which also stars Natasha Lyonne, Taryn Manning and Balthazar Getty, centers around an evening when escalating aggressions between a group of affluent preteen private-school girls and one working-class outcast come to a head at an ill-fated slumber party.

“I really feel that I relate and audiences relate to flawed characters that feel more human,” says Subkoff, speaking of the characters in her favorite horror films as well as the ones she wrote for #Horror.

If there’s one thing #Horror traffics in, it’s flawed characters. Among the most compelling is the distant and narcissistic mother played by Sevigny, who can be seen sashaying through a glassy mid-century modern house that is more of a stylish but cold art installation than a nurturing home to an adolescent girl. Tucked away in a frozen, desolate Connecticut landscape, the setting itself feels like a nice nod to The Shining.

“The absentee mother, I think that’s a character that reoccurs in horror films,” says Sevigny, who shared the screen with Subkoff in The Last Days of Disco and worked on her avant-garde fashion line Imitation of Christ. “It made my character not so sympathetic, but she has her own faults. She’s struggling with her addiction, and she’s damaged in her own way.”

Then there’s the plastic-surgeon dad, played by Timothy Hutton, who manages to bully a party full of preteen girls while lecturing them on the evils of bullying. # Horror shows how the parents’ flaws have been passed on to the girls, whose own antagonistic behavior is exacerbated by social media. What makes cyberbullying so ripe for horror, Subkoff shows, is that it isn’t hampered by any kind of physical boundaries. It can follow a victim anywhere in the world and for any length of time.

“I was bullied as a kid pretty intensely on the bus. I dreaded the bus,” recalls Subkoff. “[But] after the bus trip, I knew [the bullying] would be over. Now, it never ends. It’s always there. Even if you don’t look at your phone or online, you know that it’s still going on. It can last your entire life and affect you getting a job or getting into college.”

What really drove the dangers of cyberbullying home for Subkoff was learning that the daughters of several friends and acquaintances had endured severe bullying; one had even attempted suicide. The inspiration for # Horror ultimately came when another friend’s daughter was bullied so severely that she went away to school in England, only to have the harassment follow her. The phenomenon is so pervasive that the young actresses on the #Horror set shared with Subkoff their own experiences with online harassment — and they’re not even in high school yet.

In addition to lending a compassionate ear, Subkoff bonded with the girls in other ways, including introducing them to the classic scary movies she grew up with.

Not being allowed to watch scary movies as a kid is something Subkoff can relate to, not that it ever stopped her from watching them. She recalls the lengths she and her brother went to watch gore-fests like Faces of Death, sneaking off to other kids’ houses and even having their uncle covertly send them VHS tapes in the mail.

“I think at that age, everyone I knew who was 12 or 13 was totally obsessed with horror,” says Subkoff. “They were fascinated with it. I think it’s that natural curiosity about what scares you and thrills you, and about death and fear. It really comes up at that age, and I’m excited that I made something with protagonists that are that age.” 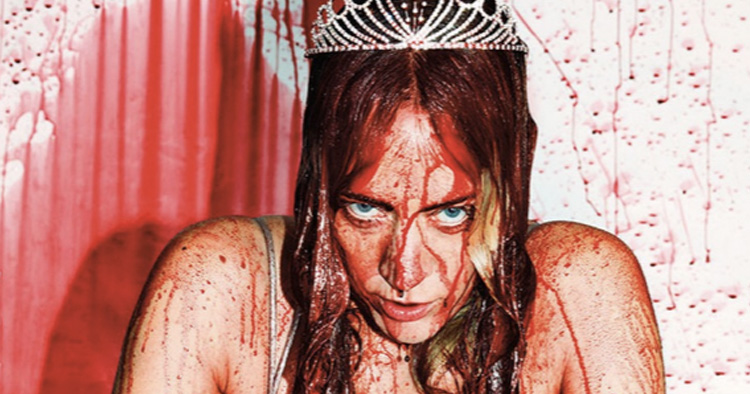