How’s this for a game of “Would You Rather”: Would you rather be locked in a house with a murderer out for your blood, or with four of your best frenemies, all of whom get their kicks by publicly shaming you? The principals in Tara Subkoff’s new film, #Horror, get to experience both those terrors at once. A stylized ode to the slasher flick, the debut feature from the ex–Imitation of Christ impresario finds five prep school girls, aged 12, stuck in each other’s company at a Modernist masterpiece of a Connecticut home that is itself nigh-on monstrous in its art-filled aloofness. Mom, played to campy perfection by Subkoff’s old friend Chloë Sevigny, is too distracted by her own self-actualization to realize that the kids are cyberbullying each other to death. (Literally, to death.) The setup is witty; Subkoff’s execution, meanwhile, is as aesthetically inventive as her designs were for IOC.

Subkoff made this indie the old-fashioned way, calling in favors from family and friends. Of course, in Subkoff’s case, those friends include not just Sevigny, but Natasha Lyonne, Balthazar Getty, and husband Urs Fischer, who curated the movie’s impressive collection of art, featuring pieces by the likes of Rob Pruitt and Dan Colen, not to mention Fischer himself. The result is sui generis: a PSA against cyberbullying with an exceptionally high fear factor and an even haute-ier pedigree. #Horror has its premiere on Wednesday night at MoMA. Here, Subkoff explains why working in fashion is the best possible prep for low-budget filmmaking.

How did you come up with the idea for this movie? I wouldn’t have imagined that cyberbullying is an issue that really touches your life.
It does, though. I have friends with kids, and when this idea first sparked, about four years ago, a few of them were around 12 years old and having these terrible experiences with bullying. One of them even wound up leaving for boarding school in Europe, and, you know, we’re talking about the Internet, which goes everywhere—the cyberbullying followed her there. That was just shocking to me. I mean, I’d been through a terrible phase at that age, where I was severely bullied—the worst of it was on the bus, and I have very intense memories of dreading that ride to school every morning, and then getting on the bus and counting the minutes until the ride was over. What struck me about the cyberbullying thing, as being particularly terrorizing, was the idea that it was never over. I don’t know what I would have done if I’d felt like my whole life was just that bus.

And how did that story wind up turning into a slasher flick?
Well, it is a modern horror story, isn’t it? It wasn’t a big leap. Especially because I’d grown up loving all the old horror movies—early Wes Craven, The Shining, The Exorcist. This was sort of my ode to that era of genre filmmaking.

I think, perhaps, the standout element of this film is its use of art. First of all, there’s the faux social media video art interspersed throughout, which you created in collaboration with the artist Tabor Robak; then, too, the house where the five girls are stuck is filled with work by boldface-name artists. What inspired you to make art such a key part of the movie’s world?
One of the things I was thinking about a lot while I was writing this screenplay was how those old horror movies were so particular—they had real characters, real arcs, a real sense of place. I wanted to do that, too. So I set the story in a world that I know. I grew up in Connecticut. I grew up around art. The art was a vital part of writing the film—the pieces in the house, they’re a reflection of the character of the man it belongs to. He’s a collector, he’s obsessed with his collection; he doesn’t care about his wife or his daughter. The art we chose is specific to that man’s taste. It was put there without concern for anyone else living in his house. And those pieces wind up being characters in the film—they bear witness to what’s happening, in a way.

As far as the collaboration with Tabor—God, I really lucked out. I got to him just before he had his big show at Team Gallery last spring. He’s blowing up now. That was such a fantastic collaboration—we were talking about how people are so addicted to their phones now, you can’t even walk outside in New York without someone bumping into you because they’re texting or whatever, and it’s only going to get more immersive because virtual reality is coming, and so on. I wanted Tabor to play with that idea, and do something that just came at you, at all your senses. It works beautifully in the film, but it’s also very true to his style of video art. I’m really, really happy about that.

To come back to the issue of cyberbullying . . . Personally, it’s one of those issues I’ve heard about sporadically, one more thing in the news cycle, but I hadn’t understood it to be pervasive. Is it?
To put it in perspective: Last year, over 150,000 youths were admitted to emergency rooms because of self-harm due to bullying. Cyberbullying is a big part of that. And it crosses all cultures, all demographics—it’s not just a rich, white girl problem.

Is this even a solvable problem? I mean, I remember middle school. It sucked. Kids that age, they’re kind of just . . . dicks.
Well, we can’t just stand by and let it happen. My hope is that the film raises some awareness. And then, I’m also involved with an organization called Bridg-it.com, which is a new app that’s launched now in about a dozen schools in the New York area. Kids can use the app to report bullying—but the interface is similar to Snapchat, the messages get erased after they’re read. It makes it easier for kids to call things out—quicker, faster, no trace.

You’re not the only fashion industry alum to make a horror film: Laura andKate Mulleavy shot their first feature this summer, and they went for the same genre. Do you think there’s something about horror that lends itself to being stylized in a way that feels familiar to someone who’s been in the fashion trenches?
Hmm. I’m not sure about that. There is a history of horror movies with a great aesthetic—you can look at a director like Dario Argento, for example. Like I said, for me, the horror thing just came out of the fact that I’d always been a fan.

What I will say is that working in fashion can serve you, if you decide to direct. For one thing—okay, I was an actress before I did Imitation of Christ, and I can tell you, most people in Hollywood have zero aesthetic. None. So if you’re coming in with a sensibility, with taste, you’re already at an advantage. And then, you know, I never thought about myself as a designer when I was doing Imitation of Christ; it was tactile labor, we were making things with our hands, cutting up old garments and sewing them back together, embroidering them, and so on. We were our own little sweatshop. Making this film wasn’t too different—it was a hands-on experience. The whole thing had to be willed into being.

And no one works harder, faster, than people in fashion. When you’re putting together a collection, you’re forced to pay attention to minutiae-level detail—but you’ve also got to train yourself to see detail quickly, because fashion is a demanding, fast-paced business, and when you do a show, there are no second takes. Quick decisions, long hours. That was great training for directing—and directing was what I wanted to do all along. I knew from acting, there aren’t many female filmmakers, because there’s a situation in the film industry that if you’re a woman, you get one shot. If you make your first movie and it doesn’t succeed, you don’t get any more chances. I wasn’t just going to get a movie out there and then move on to the next thing. I had to get it right. 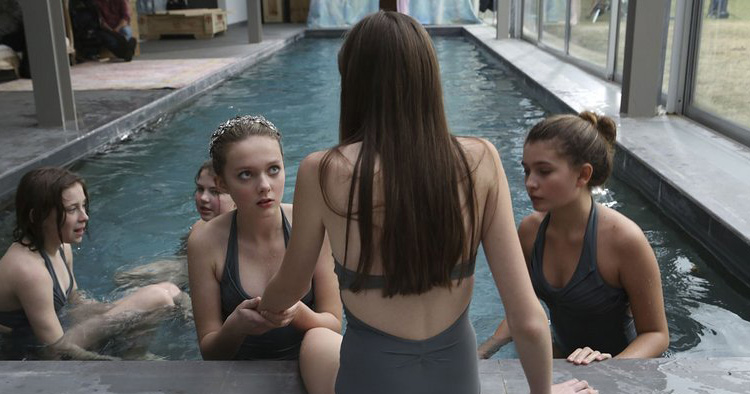