Marc Katz, the twenty-six-year-old director of the live-action short “People Are Becoming Clouds,” is a cinematographer who lives in Manhattan. “Clouds,” as he calls it, was an official selection at the Toronto International Film Festival last year; it is his first narrative film. The idea for it arose when his life changed and a short story he’d once read struck him anew. “I got married almost three years ago,” he told me in a recent phone call. He and his wife met at Cambridge, in the U.K. (Katz also studied film at N.Y.U.; he graduated in 2012.) “We got in this crazy situation because we got married in England, and she couldn’t come here,” he said. It took two years. He was in New York and she was in the U.K. During that time, he said, “I remembered this story I had read several years earlier, in McSweeney’s”—Joe Meno’s “People Are Becoming Clouds.” The story is about John and Eleanor, a young married couple. Once in a while, Eleanor turns into a cloud. One can imagine a young man in Katz’s transatlantic marital situation responding to a story that features a loving but ethereal wife. “It was one of the best stories I’d ever read,” he said. “I picked up McSweeney’s again and reread it, and it resonated with me.”

Meno teaches writing at Columbia College Chicago. Katz found Meno’s e-mail address on his faculty page, wrote him, and asked for the rights. It went smoothly, Katz said; Meno even liked the fact that Katz and his co-writer, Adriana Campoy, took liberties with the story. For one thing, they turned an unnamed therapist the couple visits only once into an important character. “We brought in Dr. Corduroy,” Katz said. The movie begins with John (David Ross) and Eleanor (Libby Woodbridge) taking a subway to Grand Central; they kiss, he leaves, and she becomes a cloud. Later, they seek counselling. When Dr. Irving Corduroy (Sean Cullen), Weather and Relationship Specialist, first appears onscreen, the tone, which had been straightforward, with moments of meteorological whimsy, shifts pleasingly: the film lets us know that it has a sense of humor and won’t drift irretrievably into a realm of poetry and preciousness. It comes as a relief.

When I first watched “People Are Becoming Clouds,” I was startled not just by its confidence and mastery of tone but by its happenstance echoes of another film I’d written about for the Screening Room series, Oscar Sharp’s “The Kármán Line,” which, I will say without spoiling anything—it’s wonderful, and worth watching with fresh eyes—has similarities both narrative and atmospheric. Katz admires “The Kármán Line,” which he learned about during production on “Clouds.” Both films use magical realism to give viewers a pleasurable respite from small, sad moments we know too well from daily life, to much different ends. “Clouds” employs wisps of cumulus and duck-shaped clouds to evoke failures of communication and moments of disconnection; “Kármán,” suggesting mortality and transcendence, uses the whole sky. “Kármán” is loving, tragic, and empathetic, with a wryness so delicate it’s almost holding its breath; “Clouds” is gently deadpan, interweaving the quotidian and the absurd. The acting is naturalistic and just right, with little gestures that resonate. As a director, Katz said, “I just felt like I was watching very carefully. If there’s a moment, like when he kind of sings, I paid attention.”

In a flashback scene in “Clouds,” John and Eleanor, who are moving in together for the first time, effortfully lug a mattress up a flight of stairs, bickering. Upstairs, John brightly decides to unpack all the boxes. Eleanor doesn’t want to. He insists. She watches in annoyance. He begins to unpack, improvising a zippy unpacking song. In real life, Eleanor’s feeling in that moment, a flat, fatigued disappointment at not being seen or heard, could lack levity; here, we get the gift of her becoming a puffy cloud, escaping him. Or, from his perspective, we see the maddening frustration of a partner shutting down, retreating. Either way, it’s a lovely cloud.

One of the great pleasures of the film, it must be said, is the cloud work. There’s a cloud in Grand Central, a cloud at the supermarket. Each cloud looks beautifully celestial, a bit magical. “I’m very proud of the clouds,” Katz told me. “They’re pretty much real.” I, a nonscientist and illogician, imagined that Katz and his team had somehow conjured them from water vapor. But they are real in the moviemaking sense: physical objects, with a smattering of special effects on top. “They’re made out of the insides of pillows,” Katz said. “Like, pillow guts.” The pillow guts were shaped into clouds and taped onto wires by the production designer, Yuko Sobrin. “Wisps and stuff” were added in post-production. The clouds serve a purpose beyond spectacle.

“I feel like the clouds, having that device, let us talk about really mundane things,” Katz said. “I love Raymond Carver, and I like very small moments.” Dr. Corduroy does not make a clear diagnosis, nor does he cure Eleanor’s condition; the end, which is ambiguous, seems to indicate that John and Eleanor accept the weather and each other as they are. Katz’s own marriage now features a green card, contentment, and cohabitation; John and Eleanor, poor things, continue to float along, with patches of clouds and sun. “I was very clear about how I wanted the movie to end,” Katz said. “It needed to be sad and kind of hopeful. I didn’t want to answer any of the questions. I wanted to just leave them hanging there in the air.” 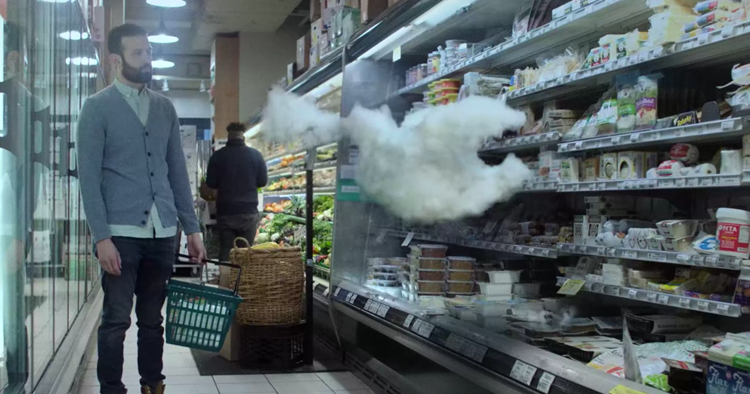