Read More on Vice >>
Actress and Imitation of Christ designer Tara Subkoff tapped Chlöe Sevigny and Natasha Lyonne for her directorial debut, then rallied a squad of teenage girls to take a stand against online harassment.

Enlisting a standout cast including our ultimate New Yorker Chlöe Sevigny, as well as Orange is the New Black‘s Natasha Lyonne and Taryn Manning, actress and Imitation of Christ designer Tara Subkoff made her feature-length directorial debut at Cannes with #HORROR. The slasher social commentary sees a group of 12-year-old girls fall into an online rabbit hole where a minute of cyber-bullying spirals into a full-fledged night of insanity.

Although Subkoff drew from her own experiences being bullied as a teen in crafting the film’s storyline, #HORROR is predominantly inspired by a family friend’s daughter who was bullied online even after she transferred to another school. Whereas Subkoff’s IRL bullies would lay off after the final bell rang, today’s URL bullies bombard their victims with hate around the clock.

Following the film’s premiere at Cannes this weekend, Subkoff rallied over 70 young girls between the ages of 12 and 16 and took to the city’s main drag, the Promenade de la Croisette, to protest cyber-bullying. Sporting masks and picket signs designed by Swiss artist (and Subkoff’s husband) Urs Fischer, the girls shouted slogans like “Bullying Kills!” before local authorities shut the demonstration down.

While #HORROR marks her first feature, Subkoff is no stranger to performance. She started acting in films at 19, landing roles in As Good as it Gets and The Last Days of Disco. Additionally, many of her Imitation of Christ presentations were more performance pieces than fashion shows. One, staged at the Carleton Festival of the Arts in São Paulo, lasted 10 straight days. Given that #HORROR is already attracting international distributors, we’re excited to see what Subkoff’s future behind the camera holds. 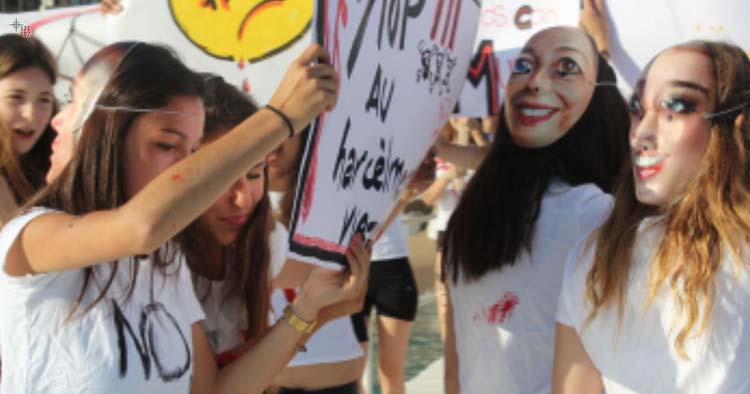